If you don’t know of Ho’Oponopono, allow me to introduce you. It is a Hawaiian healing technique and the translation is “To make right”.  Its focus is simply on forgiveness and love. It is deceptively simple mantra of the four phrases – I’m sorry. Please forgive me. Thank you. I love you.

In essence, the underlying belief is that you have some level of responsibility for the creation of anything that comes into your awareness – possibly even on an unconscious level. This mantra enable “clearing” to happen to heal the situation. Now, that might bend your mind a bit and I totally get it. I was really sceptical when I first became aware of this technique, but I have tested it so many times and it always delivers. I was so impressed with it that I became a Certified Ho’Oponopono Healer.

If you want to find out more about this healing technique, get your hands on a copy of Dr Joe Vitale and Dr Ihaleakala Hew Len’s book Zero Limits. It explains the technique in detail.

For those who know and understand the power of this technique, take your Ho’Oponopono healing practice to the next level. This one will blow your socks off, in the BEST possible way.

You can simply wear this stunning necklace, or utilise it as a healing tool, repeating the mantra as you work around the necklace. I used spacer beads when creating it to make that process easy. The crystals included are all about love, forgiveness, joy, compassion etc and are a perfect match for this healing mantra.

This necklace is only available in the one size of 88 beads and there are 11 patterns of the 8 different beads. I’ve used numerology to divinely connect to the intention of upleveling the healing. 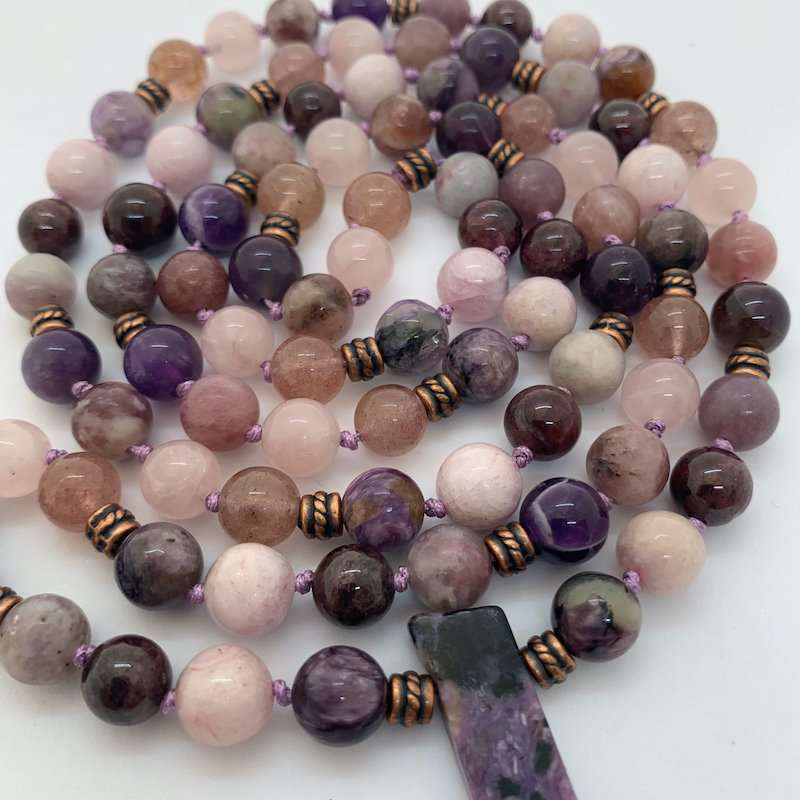 I have a story for you… 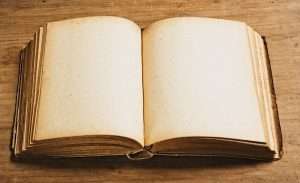 I’m sceptical by nature. Particularly when it comes to healing modalities, I need to make sure they work. This one was no different. When I first started reading the book Zero Limits in 2012, it really messed with my mind – How can I have some responsibility in all situations? It just didn’t make sense to me.  On one level I got the concept that we are all connected and all one, but this challenged me.

So, I thought I would test the theory…and the perfect opportunity presented itself as I was reading the book – of course!! lol

Setting the scene for you, it was a Monday morning and I was in Melbourne having just helped my Mum move house over the weekend. I was on a morning flight to come home and I was using an airport shuttle bus to get to the airport.

Two traffic tunnels were closed as there was an issue with their electricity. During peak hour, this resulted in absolute grid lock throughout the city. Traffic was going nowhere – fast. I was sitting in the back of the shuttle and all we could hear on the radio was horrendous traffic reports and also how people were missing flights as they couldn’t get to the airport on time.

I thought that this was the perfect opportunity for me to test this theory. I knew on a conscious level that I had not been involved in the shut down of the tunnels and resulting traffic issues. So I sat in the back of the bus and just kept repeating the mantra to myself,

Over and over and over. Certainly, I felt a sense of calm and peace. I knew that if I missed my plane, it would not be an issue – somehow it would all get resolved.

We didn’t get out to the airport at the time shuttle was due to arrive – we arrived early!! What?? Early?? We arrived at the airport ahead of our scheduled time.

When I checked my bag in, it was 2kgs overweight – no charge by the airline!! What??

When I took my seat, there was a family of 5 who filled the rest of the seats in the row. Just before we took off, I noticed that there were two rows of empty seats behind me.  I asked the host if I could move and she said that once we were in the air and the seatbealt sign was off, I could move. I did and ended up with a whole row to myself!!

Suffice to say, I instantly became a believer in this healing technique. Since then I have used it over and over and also suggested it to clients. It never ceases to provide healing in various forms.

The beads included in this necklace are: 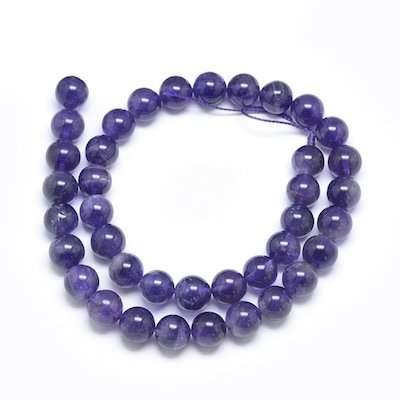 Amethyst
A purifying crystal that helps to ward off negative influences and protect from environmental stress. Calms the nervous system and brain, easing headaches and migraines. Can improve the quality of sleep. 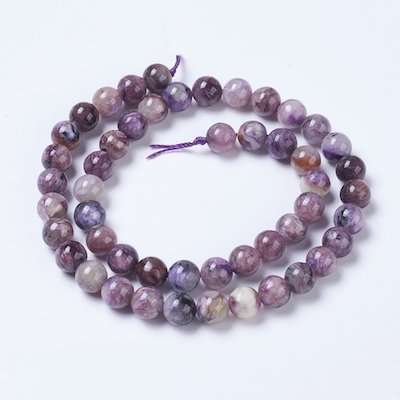 Charoite
Charoite is a stone of transformation, cleansing then aura and chakras by transmuting negative energy into healing.
It also clears past traumas and elements that no longer serve.
It opens our hearts and stimulates unconditional love.
It also helps to release old patterns and bring in new energy.
It prepares the way for spiritual expansion. 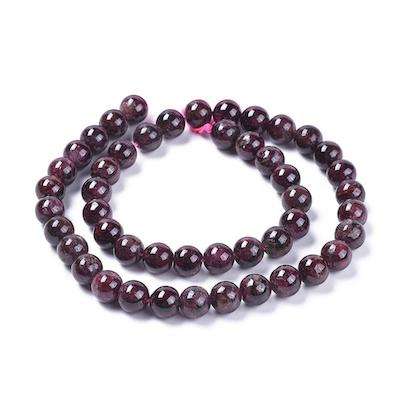 Garnet
Improves circulation and opens the way to vitality and abundance.
It balances the mind, emotions and body, bringing the heart into alignment with a higher expression of love.
Helps with discarding old ways of thinking and old patterns that no longer serve. It opens the way to abundance and vitality. 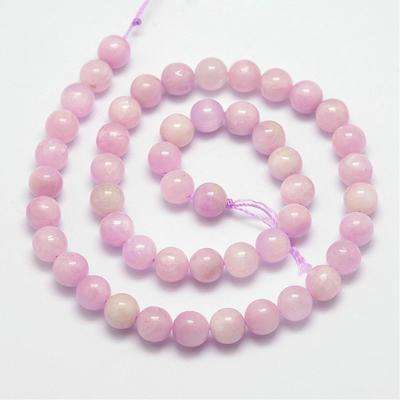 Kunzite
It protects the heart and enables it to release emotional blocks in a gentle way.
It enables surrendering and letting go of that which binds us to the past.
It has a soothing presence and encourages a sense of safety and peace.
It dissolves resistance to new ideas and directions, enabling life to flow and develop.
It also connects with forgiveness. 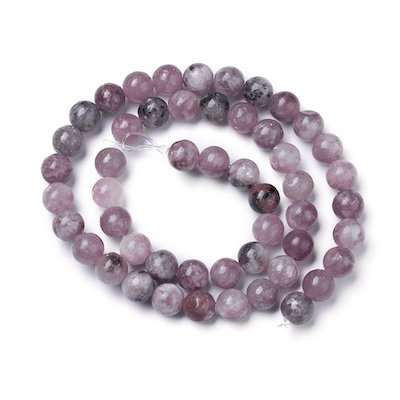 Lepidolite
Brings deep emotional healing, soothing and reducing stress and depression
Is the “Stone of Transition”, helping create gentleness around change.
Promotes feelings of peace, calm and security.
Supports the release of addictions. It dissipates negativity and insists on being used for the highest good. 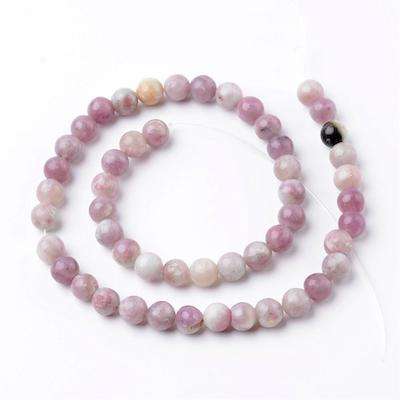 Pink Tourmaline
It aids in understanding oneself and others. It soothes the heart and eases anxiety, reduces fear and panic and fraught emotions.
It enhances energy and removes blockages. It attracts inspiration, tolerance, compassion and prosperity. 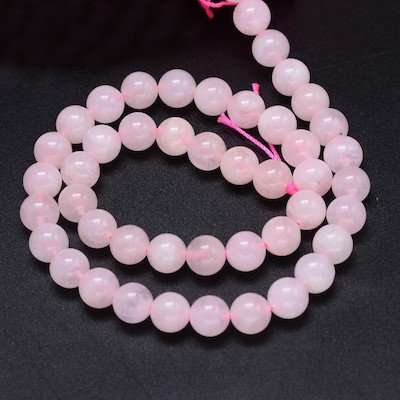 Rose Quartz
The stone of Universal Love and Forgiveness
Supports the heart in all ways, easing emotional and physical stress.
Bathes the whole body in the healing ray of universal love.
Soothes and eases anxiety and fear, bringing in warmth and compassion It is powerful for helping forgiving mistakes – both your own and others The best crystal for overcoming abuse of all kinds. 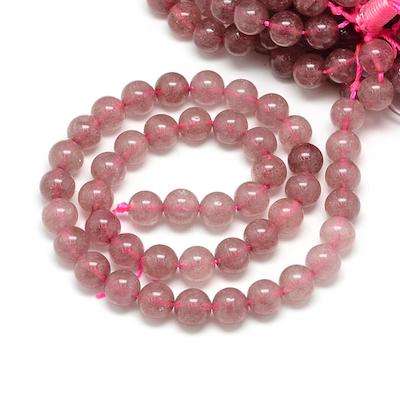 Strawberry Quartz
A very gentle and comforting crystal.
It stimulates the heart energy centre, filling ones total person with the feeling of love and with the euphoria of the true loving environment.
It carries all the vibrations of Clear quartz, with the additional attributes of universal love, understanding of purpose and seizing the day.
It has the ability to amplify intentions of love, gratitude and generosity.

This stunning necklace is made while chanting the four statements –
I’m Sorry, Please Forgive Me, Thank You, I Love You.

Pay with 4 fortnightly payments with